The beautiful town of Bromont in the fall, followed by a drive though the countryside on the way back to our hosts’ home 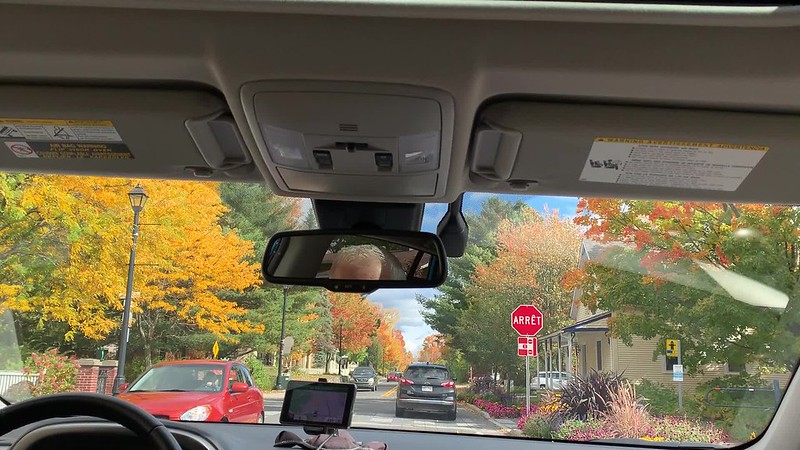 Before cruising to the Canary islands (Spanish), Madeira (Portuguese), and the cities of Málaga and Alicante along the coast of Spain, we stopped in Casablanca, Morocco, on the north coast of Africa. There they spoke Arabic and, lucky for me, French. I ended up speaking and listening to people who spoke to me in French and got along quite well. Many of them also spoke English. After walking all the way from the old medina to the Hassan II mosque, we were ready for a Taxi ride to a restaurant for lunch. Just then, at the steps to the plaza of the mosque, a taxi driver introduced himself to us in English and said, “I am taxi driver here for 27 years. This is my city. I will show you my beautiful city, take you to places you want to visit, and wait while you eat or look around. Here is my taxi; please come with me and let me give you beautiful tour of my city.”

I usually might be wary of such offers, but he seemed quite genuine and trustworthy, so we took him up on it. While getting into the taxi I asked him if he spoke French, and he said “Oui, bien sur” (yes, of course). I told him I would like to practice my French with him and he said he would like to practice his English with me and we could each speak to the other in our second languages. That is what he said, but in practice, we ended up speaking mostly French. He did prove himself trustworthy by first taking us to an authentic Moroccan restaurant called L’Etoile Centrale as well as running in with my husband’s phone which had been left on the backseat of the unlocked taxi. We had a delicious meal, heard Arabic, French, and English spoken around us in various turns by the same people, and got back in the cab with Mumu (that was what he told us we could call him though his given name was Muhammaed).

The only thing Mumu did that I really, really didn’t like was take us to a rug store. I told him before he took us there that we weren’t interested in rugs, but he said we must go look at this “textile cooperative” because it was their culture. I hoped it might be like a living museum. When we got there, they took us into this showroom, brought us a silver tray of mint tea, and said, “This is Moroccan hospitality, you will please accept our offer of tea.” Then they proceded to show us various kinds of rugs— thicker, thinner, rougher, softer, this one of silk and this one of wool, of this design or that design. They asked us which one we liked the best, and there was a soft silk rug with a background of blue decorated with yellow, orange, red, and green. I said I loved it and it was beautiful. They said this was valuable, the more you use it, the more valuable it becomes, it becomes more valuable with age, we will cherish it forever, they will ship anywhere in the world, and “How much you will pay for this?” I explained I was simply answering their question about which rug I liked the best, but I couldn’t afford to buy it. There was a lot of pressure, and my husband even thought seriously of buying it (with money we don’t have), but I insisted that we did not come into the shop or even on our vacation to buy a rug, that the rug cost more than our whole vacation and we had to save for months to afford to travel, etc. They kept pushing and pushing. Finally, I decided the only recourse was to be rude, so I said “goodbye” and told my husband we were leaving.

Then Mumu took us to an oil and spice shop across the street. This I could do. I had already been thinking of buying Moroccan argan oil for my hair, as I have been growing it out, so I bought a bottle for 10 euros. Not bad, considering what they charge in the states. We walked back to the taxi and the manager of the rug store accosted us again. “I make you deal. How much you pay? How much?” “No much” I said, and he finally left me alone. Mumu then drove us around, and I have neglected to say how riding in a taxi in Morocco felt terrifying, even death defying, as the streets were so narrow and twisted, and our driver had to wind his way through them past double-parked cars and opposing traffic turning around curves with double-parked cars on them. Anyway, he took us past various impressive areas including the king’s palace to the new medina.

I had told him I wanted to buy some authentic Moroccan pastry. He very wisely took me to a shop called Pâtisserie Bennis Habous (pronounced the French way, Benny Aboo). This place was like a little walk-in closet covered with bins of all kinds of pastries along every short wall. They have these beautiful boxes and they cram whatever you want into them as fast as robots with ten arms assembling a circuit board. I asked for one of just about everything in a little box. Oh my God they were delicious! I must admit they all tasted about the same — a kind of marzipan filled dough baked to perfection — but it didn’t matter. This place more than made up for the rug store (sorry, “textile cooperative”). And they cost something like 3 euros altogether (or maybe 5 €; I don’t remember).

Assortment of pastries from BH

After getting pastries I said I’d like to get a couple of souvenirs “not made in China.” We went to a little stall where they had clothing and other items. I liked the kaftans, and the shopkeeper showed me the one I picked out in blue and insisted on putting on me a fez and shoes to go with it. I didn’t want the fez and shoes, but I did take the kaftan. We haggled in price and he didn’t come down as much as I thought he would, but it seemed fair enough, except we didn’t have enough cash and he didn’t take cards. We discussed with our driver about going to an ATM and he said he could pay the shopkeeper and then take us to an ATM and we could pay him back. He handed the shopkeeper to twenty-dollar bills and I said, “Oh, I have two twenties” and handed my twenties to the driver. They then argued in Arabic and I couldn’t understand why. I looked up the French word for haggling in the car and said to Mumu “j’ai reconnu assez beaucoup de chipotage là-bas,” (I noticed a fair bit of haggling there), and he explained that they looked at the date on the bills and valued the currency based on the date of mint. I asked him why, that there was no sense in that at all, and he said, “mais c’est comme ça” (but that’s the way it is). Something my husband said to me this morning reminded me of that resignation to the way things are even if they are make no sense, and I thought to myself, “mais c’est comme ça.” I think that phrase will be one of my lasting souvenirs.

I was very glad to know French because it made our time together much more interesting. At one point he had a lot to say about his family in response to my questions and he rattled it off quickly in French and said “Wait! Don’t tell him yet!” when I was about to interpret to my husband; then he kept telling me his story and said, “Et maintenant vous lui expliquez!” (and now you explain it to him!). His insistence on holding court made me laugh, as well as his control of me as an interpreter, which I am not quite used to experiencing even when I’m doing it for a living. I was proud, though, that I understood him and was able to interpret what he said, even though I wouldn’t have been able to say even half of what he said half as fast as he said it.

All-in-all we were glad we went with Mumu. I told him I felt like he threw us to the sharks back there at the textile cooperative, but other than that we had a good time. Between our walk by ourselves and our ride and stops with the taxi driver, we had a decent time in Casablanca. I don’t know what it would have been like if I hadn’t spoken French, but I think it helped that I did. I imagine he earned a commission of some kind at each place he took us to, or at least some sort of kickback. At the restaurant he got a sandwich, and I imagine he would have gotten a lot more if we had bought a rug– or maybe he owed them and that would have cleared his debt; I really don’t know how it works there. At any rate, I felt what we paid him (I think about 50 Euros, though I don’t recall) was worth it. We had a good time. He did what he said he would. I asked for this selfie to remember him by.

See more of my photos, as well as videos, of Casablanca.

The amazing thing about these is that I inherited 5 glasses like this from my grandmother, who did at one time live in Prescott. I wonder if she bought them there. Does anyone know anything about the provenance of these glasses?

They have no mark on the bottom, and they look hand blown (each one is unique). The lady in the store was kind enough to sell me just the two yellow-green glasses on the front left, because those are the ones that look like my grandmother’s.