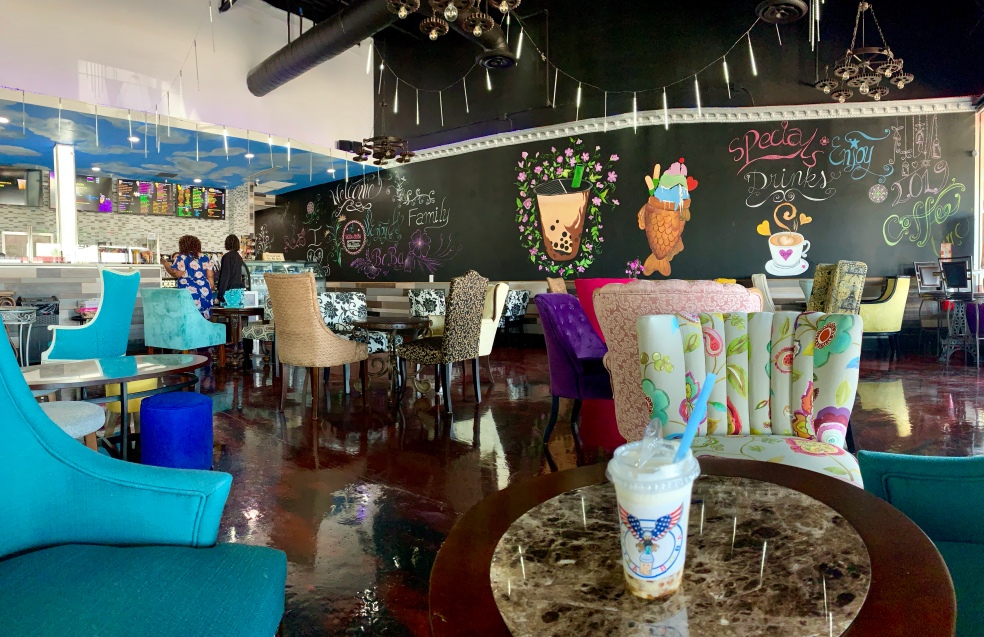 Supplement to my review of Tastea Boba on Yelp:

This was my first time at a boba house. I expected a little hole-in-the-wall with the kind of limited selection they have at donut shops. What I found instead was a big space filled with all kinds of different comfy chairs to lounge in, chill music filling the air, and a menu with more choices than I knew what to do with! I felt transported to the kind of coffee house I remember from the late eighties before Starbucks opened on every other block.

The lady at the counter patiently listed all the options for all the drinks– five kinds of tea, six kinds of boba, four kinds of foam… how many permutations is that already? And that’s not to mention the smoothies and everything else. I ended up choosing a roasted oolong milk tea with sea salt foam and brown sugar boba.

The drink was like nothing I’d ever tried before. It hit all the flavors and mouth feels I imagined: bitter, sweet, creamy, nutty, salty, and cold. Yum! And the chill lounge ambience had me glued to my chair while I waited to get my hair cut at the Great Clips a few doors down. I was likely to stay too long, like a hero on a quest who is lured into remaining in the land of the lotus eaters.

Before I could get sucked into the lush life any deeper, I went to check on my wait at Great Clips. it was going to be at least another half hour so I went back, this time to try something to eat. I had a hard time figuring out the difference between their “cheese sticks” that come in either either “America” or “Italia” flavors. Turns out they are breaded and fried cheese sticks, like the typical mozzarella cheese sticks. What is confusing is that America is not made with American cheese but with white cheddar cheese (I made sure to tell them how confusing this would be for a lot of people), and the Italia is made with mozzarella cheese with a seasoned breaded crust (which makes more sense). I ordered the America. They were good, but I would have liked a sauce to do them in, the way one usually gets with mozzarella cheese sticks. I guess I could have dipped then in ketchup (American much?), but I don’t dip fries in ketchup either. I can’t complain about that but I don’t know if I would order them again. I’d be curious to see what their Italia fried cheese sticks are like, and if they come with marinara.

One note: I had a hard time getting clear answers from the Asian chefs, whose presence prove the authenticity of the place but also presents a language barrier. This highlights the one aspect I think needs to be improved: the menu information needs to be clear to the average English-speaking customer who doesn’t speak boba much less comprehend confusing food options.

Thanks to the variety of the menu, which is full of novelty to me, and the beautiful ambience, which was a surprise to me, I will totally go back and take someone with me on a nice “date.”

UPDATE a week later: language is still a big barrier here. The cashiers, who speak English well, do not have the chefs’ knowledge of the products. When I asked “what’s the difference in flavor between the ‘black’ [considering there are several varieties of black tea, such as orange pekoe and Earl Grey, to name a couple] and the ‘roasted oolong’,” the cashier defers to the chef/owner, who does not speak English well and spends two minutes trying to explain but just confuses me even more. After the chef went back to the kitchen I suggested to the cashier that those who speak English well learn the knowledge the chefs have so they can articulate what all these exotic foods and beverages are. (I later Googled ‘what is the difference between black tea and oolong tea’ and instantly got a response that took me 10 seconds to read and made complete sense.)

Their menu continues to confuse. They have several kinds of cream foam — sea salt, tiramisu, matcha, and ‘cheese’, which even the cashier could not explain, but which I asked if tasted like cream cheese and he said he guessed so — and none of them is listed on their menu. Other items are worded so similarly that you wouldn’t know the difference between them, such as ‘milk tea’, of which there are four kinds (black, roasted oolong, matcha, and jasmine) and ‘milk tea flavors’, of which there are many kinds, including taro. I asked what the difference was between ‘milk tea’ and ‘milk tea flavors’ and was told the flavors were not actually milk teas— and neither the chef/owner nor the cashier could explain what they were, if not teas. I asked how much it cost to add one of them (taro) to a milk tea, and it would cost more than either the taro ‘milk tea flavor” ($4.99) or one of the varieties of ‘milk teas’ ($4.75–5.50). Two more examples and then I’ll stop: under “House Specials” they list “Tastea Special” and “Queen Cup.” I have no idea what they are, and I hope the staff can articulate what they are in plain English!

Please note: I of all people know how hard it is to learn a foreign language, and I do not mean to make fun of their English. I just think that customer education in clear wording will be key to helping the uninitiated to understand, and therefore *purchase*, these products.