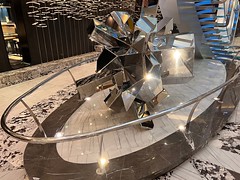 My friend Robert, who took this photo of his daughter after a self-portrait of mine, writes:

I’ve wanted to take this pic for a long time. I saw Daniel’s pic and thought to myself “I have one of those whistles somewhere around the house.”

My daughter didn’t need any coaxing to pose for this as she’s always had a very high opinion of Dan. She’s in good company.

Wow! I’m flattered. When someone takes what you’ve created and creates something else in response, that’s interactive, co-creative art! That’s community. I love it!

P.S. I’ve met Robert and his daughter Stephanie on a few Flickrmeets and photo strolls.